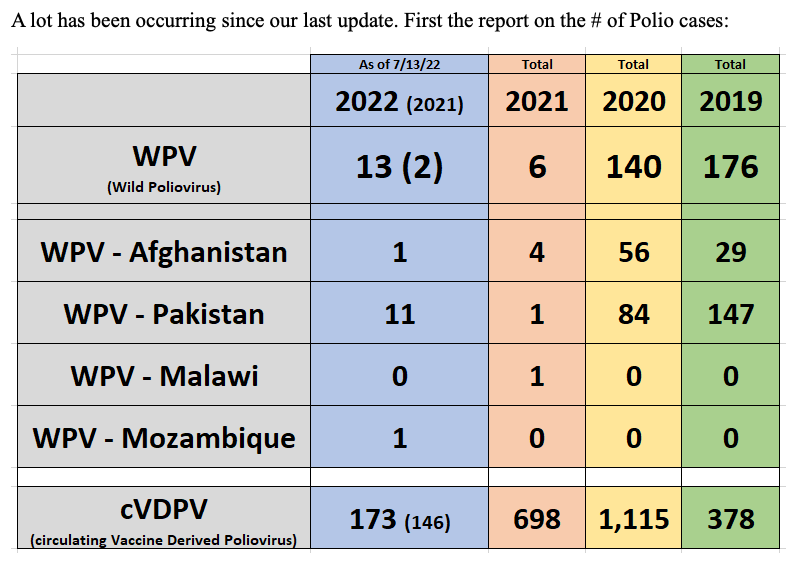 Pakistan: Although cases are up, they have all been in the same region (near the border of Afghanistan). As a result, an emergency response has targeted this area, attempting to vaccinate as many children as possible.

Malawi & Mozambique: The Health Ministers of Malawi, Mozambique and the neighboring countries of Tanzania and Zambia have all made vaccinating their children against the poliovirus their #1 health priority. Rapid response teams are in the process of conducting multiple vaccination campaigns. Both the cases have been genetically linked to the wild poliovirus in Pakistan.

London, England: Health officials found traces of the poliovirus in sewage samples collected from north and east London between February and May 2022. The poliovirus found is considered “vaccine-derived,” not the Wild Polio. Officials have not identified any cases yet, but they plan to monitor the situation.

cVDPV: Since the rollout of the new nOPV2 (novel Oral Polio Vaccine Type 2) in February, 2021, cases have significantly dropped. This new vaccine is specially designed for vaccine-derived outbreaks and is more stable and resistant to mutation.

Thank you to everyone for helping to eradicate Polio from the face of the earth,